You Wanna Be Who? 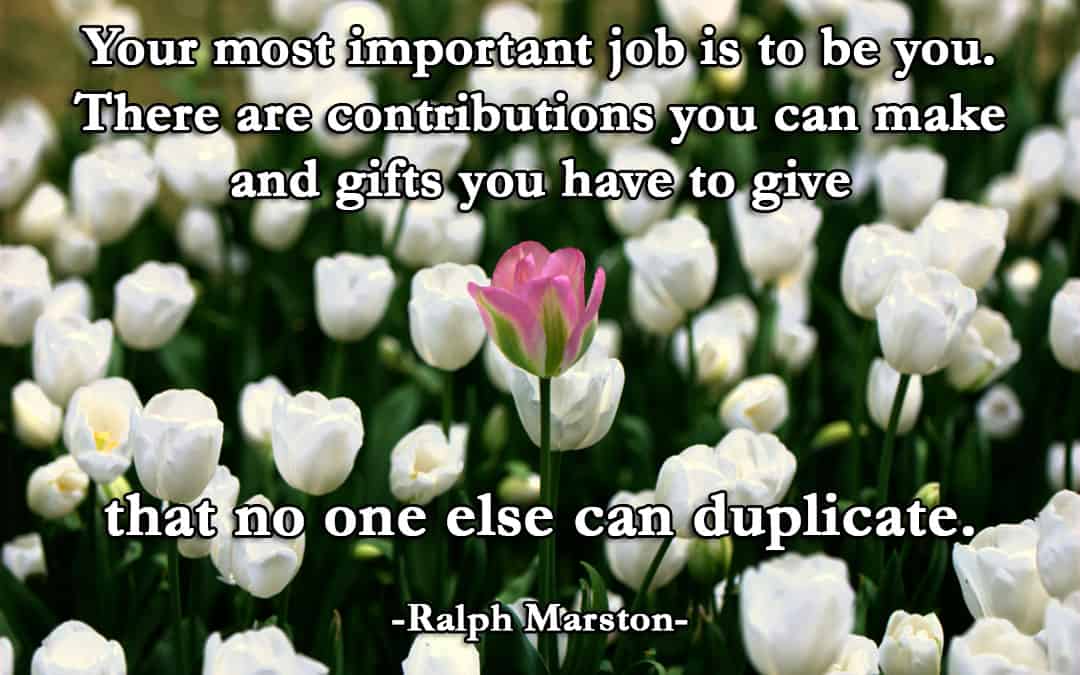 There are over 7 billion people on the planet and there’s no one like you in this world. You are a unique one of a kind being. You are a very scarce commodity and the more you risk being yourself, the more wonderful your life becomes for you and the world. Do you believe this? Do you allow yourself to be your unique self or a replication of everyone else? When was the last time you went shopping without combing your hair?

There’s a story of two boys drawing pictures in their art class. The teacher came up to them and said, “Oh, those are nice pictures but you know, flowers don’t have faces.” One of the boys immediately crumpled up his paper and started over. The other boy looked at the teacher and said, “Mine do.” and kept drawing. That boy’s name was Walt Disney. Walt never let anyone tell him who he was or how he should see the world.

Reflect on the times in your life when you didn’t stand up for your unique view of the world and your part to play in it. Reconnect with those other times when you were free as a bird to do and be who you were with no outside interference from anyone. In which settings did you feel Alive and in which did you feel lifeless and defeated? When we try to be someone other than who we really are, we lose energy and die a slow death.

Howard Thurman instructs us in this when he says: “Don’t ask what the world needs. Ask what makes you come alive, and go do that. Because what the world needs is people who have come Alive.” What if we were teaching and coaching one another to become Alive rather than to become part of the conforming herd? What if each of us decided that there would be “No more business as usual”, no more selling out?

Have you ever seen a line of caterpillars blindly following one another? An experiment was created where a significant number of caterpillars were put on the outside edge of a round bowl. They eventually caught up with one another to become like a group of train cars crawling round the edge of the bowl. In the center of the bowl was their favorite food. For seven days they blindly followed each other around the bowl until they died.

On the other hand, have you ever seen a group of butterflies? Do they blindly follow one another round and round or do they have a different pattern of life? Imagine how the world would change if we caterpillars would remember to enter the transformational process of becoming butterflies. Picture how your world could be . . .

See the aliveness, the innovations, the creativity, the beauty, the over-comings, the contributions you could make. Imagine coming Alive and challenging all your limiting beliefs. Imagine You being You, the One you were created to be. Step into that picture!