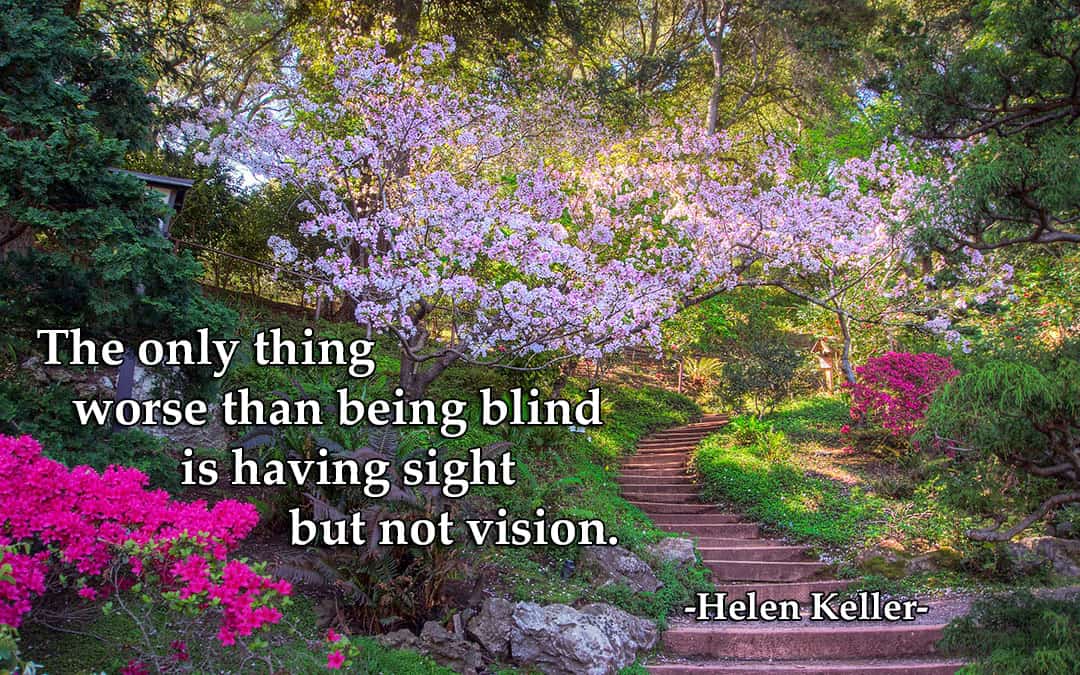 It was a three day intensive training retreat on Awareness and Leadership Development. It was scripted in a very straight forward and rigid way. The morning of the second day we broke into small groups of four, were given a teaching on ‘Mission’ and directed to write our own personal Mission Statement. While I pondered the process one of the facilitators challenged me and point blank asked: “What’s Your Mission?” The shock shifted something inside as I realized I didn’t know….. It was another beginning on the long road of self awareness and Self discovery.

The vision Helen Keller points to and I want to speak about is not an external reality and yet it can be associated with one. It’s more about seeing with an inner eye; opening the imagination to look beyond what is known into the unknown. It’s a way of loving, listening and learning beyond the rational linear mind. It’s seeing what others are not and maybe even can’t see due to their conditioning and fixed mind-sets. It’s an ability to dive deeply into the depths of today’s mysteries to help create tomorrow’s futures. It’s something we all possess yet don’t cultivate.

When I was a boy watching black and white television I fell in love with cowboys. I identified with Roy Rogers, the Lone Ranger, Rowdy Yates and Sky King. Other T.V. heroes were Lloyd Bridges of Sea Hunt, the Aquanauts and James Mitchner’s South Pacific Kontiki adventures. I grew up wanting to be a cowboy, a scuba diver and an adventurer. Over the years I pursued all these ‘dreams’ and more. Still, I had no real idea of a ‘Vision’ of life except to enjoy, explore and learn as much as I could about all kinds of things. In retrospect my vision was to explore.

I was raised in a small town in southern Michigan in the fifties and sixties. Everything about it was about fitting in, doing your job, accepting your station in life and in many cases helping your children move up in the world by helping them to go to college. It wasn’t until my fourth year of college that I began to see beyond the script I was acting from. It was the late sixties when the small safe world I’d known began to come apart at the seams. Classmates from everywhere were being sent away to be brought home in body bags. Cognitive dissonance overtook me. The walls of my conditioning began collapsing. I began to see in conflicting ways.

After a host of graduate degrees and adventure experiences I settled into a marriage, a professional job and parenthood. Forty years later I’m still exploring. Every Vision starts with you, grows out from there and has to be so big that you’ll never be able to complete it in this lifetime. It’s that ‘One Thing’ that inspires you in everything you do because it comes from your Inner Being. It’s the overarching need and desire to live into your highest calling which always includes others. It touches your heart and soul and is lived out from your depths.

You’ve probably heard the expression: “Do what you love and love what you do.” To follow this directive is to follow the inner alignments that bring life to life for you. It’s a process of experimentation based on what calls you into love, joy, peace and an inner sense of aliveness. It brings a sense of harmony, interconnectedness, satisfaction and flow. There’s a reciprocity of receiving and giving with what you’re engaged in; a sense of accomplishment and fulfillment. Through the various stages of life there’s an evolving expansion which leads you further on into new ways of being, belonging and becoming. The process in ongoing.

The Vision of your deepest needs and desires always leads to action. You find yourself in situations that fulfill you and not. When there’s no inner harmony and connection to the doing, it simply means it’s part of the learning that’s necessary for you to choose another path. Over time there are inner promptings you follow because they flow with your hearts’ desires. You begin to know the path because of the inner peace and prosperity that follows in spite of the difficulties, failures and hardships. How are you living into your hearts’ desires?

Having a Vision for your life that leads to Action brings it forward no matter what you’re doing. It’s a recognition that you’ve connected with your Essence. It will be easy and difficult, inspiring and demanding, partial and complete. It engages all your emotions and requires work and play. Each day there’s an inner sense of being on target, on task, on the path that honors the Who that’s Truly You. It’s practical and impractical, creative and tedious, disciplined and free flowing. It’s your mission of service to yourself and the whole of creation. It’s your Life . . .