The Alchemy of Reverence 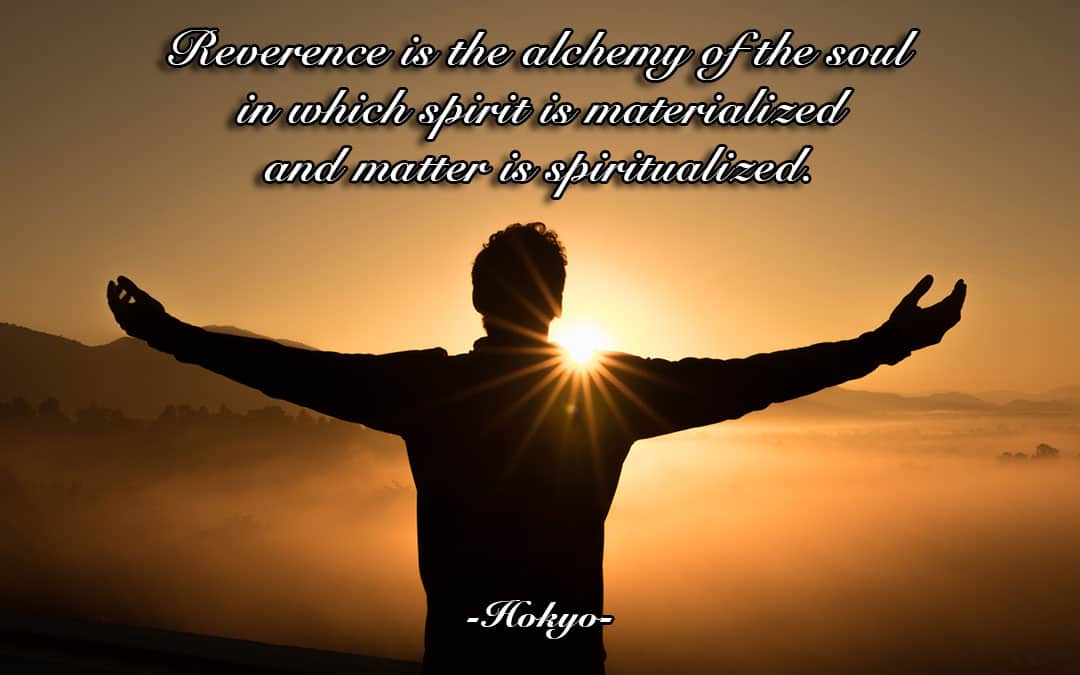 The other day I was in my study talking with my eight year old grandson about outer space as he’d recently visited the NASA space center in Houston. We were discussing the difference between the cosmos and the universe as he’s already chosen the field of astrophysics as a career path. In a pregnant pause he queried;  “Papa Ji, do you know that soul is a code word for the cosmos within us?” I was stunned at his insight, processed my surprise and said: “Wow, I’ve never heard it said that way before but Yes, I agree. Where’d you get that?” “I don’t know,” he replied, “but it’s cool that you agree!”

I queried a little further but he changed the subject and moved on from there as if he simply wanted my opinion and having it, could now move on to our morning outing at the rec center. In reflection, I’ve experienced a strange sense that in that moment there was a transformation in matter and spirit we both unequivocally accepted without hesitation. The revelation we both experienced was taken for granted and fully accepted as normal. For me it was anything but normal to have that conversation.

I picked up a book I have in my library yesterday by Carl Sagan, opened it to a random page and read: “The cosmos is within us. We are made of star stuff. We are a way for the universe to know itself.” In that moment I remembered a phone conversation I’d had  the prior week with a close friend who’s a Zen Priest and Roshi. He’d explained how Ken Wilber, a noted contemporary philosopher distinguished Cosmos as outer space and Kosmos as both the outer and inner space of the universe. What’s going on here?

Alchemy is traditionally defined as a process of transformation that changes lead into gold. Most think of this literally but true alchemy is changing the lead of our humanity into the gold of our divinity. It’s a transformational process that Carl Jung, father of depth psychology called ‘Individuation’. Buddhists call it Buddha nature. Christians call it growing into the full stature of Christ. Science calls it the ultimate goal of evolution. It’s also known as Pure Consciousness, Enlightenment, Ineffable Being, Isness and so on.

In alchemy, the key ingredient for this ongoing transformation is reverence. The more attention and awareness we give to the sacredness of Life the more we belong to and become an integrating part of it.“Reverence for life is always the highest court of appeal” said Albert Schweitzer. This has never been more true than today in our culture of materialism, irreverence, exploitation and desecration of our planet, its inhabitants and finite resources. We’re being called to Wake Up, Grow Up, Show Up and Enlighten Up in All our Relations. We are all part of the Beauty of Creation and it’s worth reverencing.

This alchemy of reverence transforms us from a state of ignorance and suffering to a state of illumination, peace and bliss. It starts with understanding that we are so much more than we appear to be. It’s recognizing the Ineffable Something deep within our Nature that’s beyond our transient personas yet ever present in the transcendental moments of our darkness and light. Within the context of ‘gold and gunk’ we seem to forget the gold, wallow in the gunk and wonder why everything seems so imbalanced.

We appear to be caught in a snare of our own creating without even knowing it. As I sit here waiting for words to appear on this page, I wonder at the miracle of turning energy impulses into letters, words and concepts that may communicate and connect with you. This art of writing and communicating is an alchemical process we participate in without understanding the nature of it. It’s taking something we consider to be ordinary and turning it into something extraordinary in ways that can’t really be explained. It’s a surrendering to the mystery of the Essence of Being, the wonder of the Kosmos.

I want to conclude with some wisdom words from Gary Zukav – “The requirements for our evolution have changed. Survival is no longer sufficient. Our evolution now requires us to develop spiritually – to become emotionally aware and make responsible choices. It requires us to align ourselves with the values of the soul – harmony, cooperation, sharing and reverence for life.” To heed this call today and every day is to live into the response-ability we have for each other, our children and our children’s children into the seventh generation. The Alchemy of Reverence is an Awareness of our Blessing. . . .