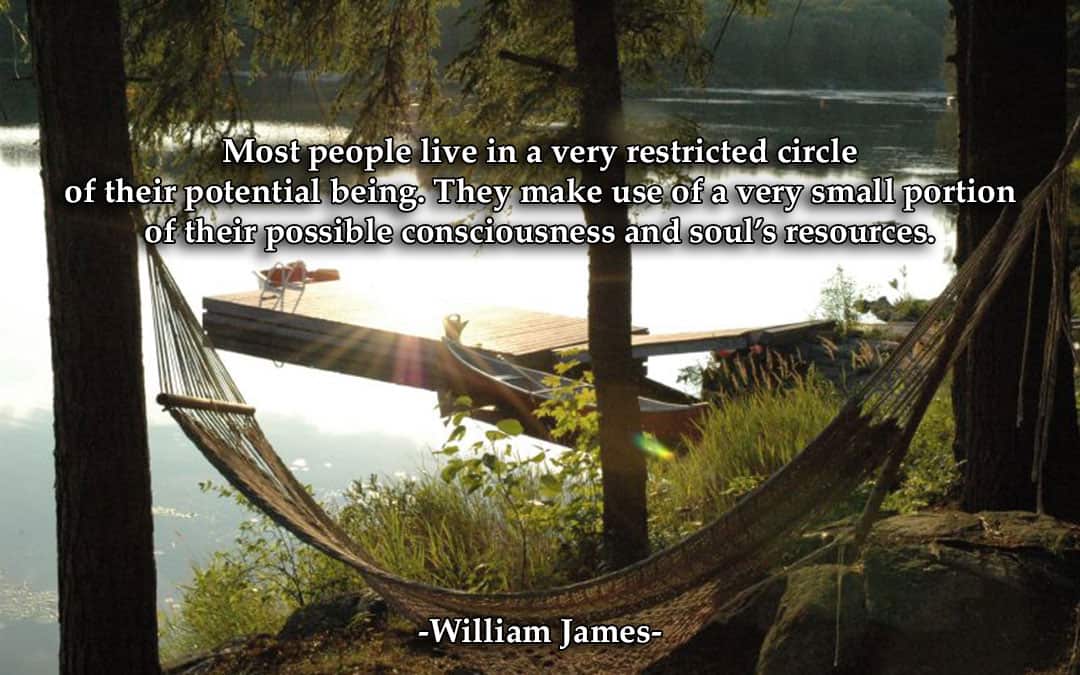 In nineteen seventy two an unknown band called the Eagles released their first album and became famous. One of the most popular tracks was a song titled ‘Take It Easy.’ It was written by Jackson Browne and Glenn Frey and spoke to slowing down and not getting to big too fast. A few of the lines say: “Don’t let the sound of your own wheels drive you crazy” and “Lighten up while you still can” and “I’m running down the road trying loosen my load, got a world of trouble in my mind. Just take it easy. Take it easy.”

Instead of taking this well known song to heart it seems we’ve sped up and continued to let the sounds of our own spinning wheels drive us crazy. It also seems as if we’ve not loosened our load but added to it with even more troubles in our minds. In the above quote William James directs us to look at the ‘restricted circle’ of our potential being. He points us to a larger consciousness and the vast resources of the soul. My wonderment is why we buy the propaganda of materialism rather than following the depths of our souls.

As I reflect over the many decades of my life I see how I’ve let others influence, bend and shape me. I’m becoming more and more aware of the mind bending power of the collective unconscious that permeates the experiences of our lives. It seems that we are folded, bent, stapled and shaped in so many ways by the collective that we don’t even realize it. Think of your family systems, the cultural, religious, political, natural and unnatural environments you were raised in. How did these all influence you?

Though we are influenced by all these energies there is a fire inside us like that which is inside the Earth. We sometimes refer to it as the divine spark, the fire within or soul. When we focus on this invisible center, all that touches us at the external level can be seen from a different vantage point. Our perspectives change and the stories from the collective become more clear and have less effect on us. We find a new way of being by following the guidance of the soul’s still small voice from our center.

When we listen to the outside material world telling us who we are and what is real we lose our own unique way of being and doing. We lose our sense of belonging to the Benevolent Something that is greater than the sum of it’s parts yet is contained by every part. We settle for the lead of life rather than the gold that is all ways here, there and everywhere. We die a slow death to simply become part of the mechanistic cultural machine of the restricted circle of living dead.

Our potential is infinite as is our consciousness and soul’s resources. All the great spiritual traditions have pointed to this and encouraged us to find the center within that  unlocks the doors of our perception. When we allow ourselves to be shaped by others   we literally give away the keys of our freedom and wonder why we feel so oppressed. They become the experts, the ones who know, the arbiters of our destiny. I know this because I used to be one of them not knowing how the ‘game’ was played.

It’s time for us all to ‘wake up’ to who we really are, to take back the controls of the lives we were given by the Source, the Great Creating, God, Life itself. Take a look at the outside influences heaped on you through everything you see, touch, hear, smell, and taste. Notice the shadows and mind parasites that are presently living within you and let the light of your soul reveal them. Practice ‘waking up’ by questioning everything and not settling for pat answers and unwanted control from the ‘so called’ authorities.

What William James, the Eagles and countless others have seen in the here and now is an expansion of consciousness that takes us into a greater and more enlivened future. To take it easy is not to be a sleep walker; just the opposite. It’s to rid ourselves of the sounds of our own wheels driving us crazy. It’s loosening our loads. It’s enlightening up while we still can. It’s finding a place within, here and now, to make a stand for our Being, Becoming, Belonging and Befriending Life. It’s time to Take It Easy and Awaken!