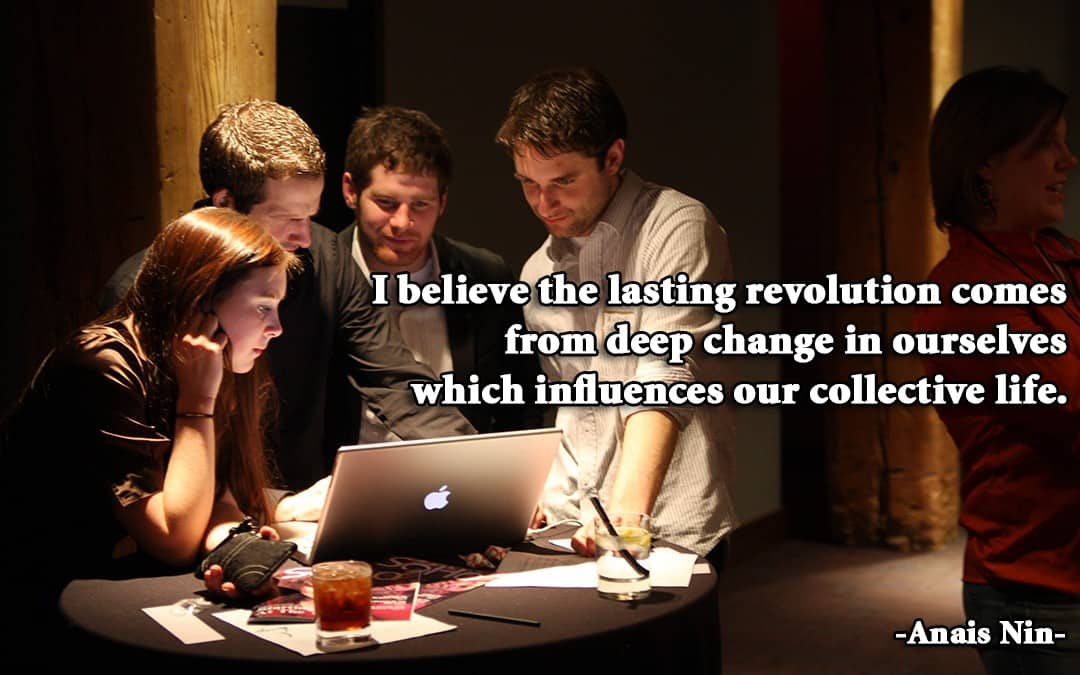 When I was a young man back in the 60’s we talked about revolution. Now that I’m a older man in my 60’s we’re talking about evolution. Losing the (r) was a significant shift in consciousness. It took us from judgment, anger, and distain to understanding, lovingkindness, and empathy. It also took us decades to realize that the changes we wanted to make ‘out there’ had to start right here within us.

As I look at the history of human development as far as I can, I see the gradual expansion of consciousness in homo sapiens beginning some 350,000 years ago when we, as a species, started using fire regularly. From then until the mid twentieth century the evolutionary progress was rather slow, shifting upward when some few caught the next wave of understanding and took others with them creating significant change.

After World War II the revolutionary movements started becoming evolutionary. The 1960’s marked an evolutionary shift which is now growing exponentially. A massive flowering of consciousness took place in 1969 when, for the first time in human history, we saw our planetary home from a radically different vantage point, the moon. Seeing our planet floating in space shifted our perspective. Our imagination grew. We became conscious of our consciousness. Our future finally became our present reality.

These past 70 years we’ve begun to see evolution as built into our DNA. Now, rather than just letting the process happen, we’ve become aware that we can consciously participate in our own evolution as individuals and as a global community. We’ve begun to participate with the Universe in deep change and transformation. We’re awakening to what the prophets, mystics, and sages have known for millennia. We’re co-creators.

This knowing and not knowing is calling forth a greater responsibility from each of us. We can no longer blame and shame ourselves and each other into submission and enslavement. We can no longer withdraw and demand that someone else change what we choose not to. We can no longer hide indifferently, rather we must find the courage to live into our visions with bold action. Are you with me in this understanding?

We’re all standing at the edge of a great awakening, an unprecedented flowering of a whole new way of being and doing in the world. This rapid and exponential change has many pulling back and wanting to return to the simpler days of the past where our prejudices and power over strategies worked. That day has passed and we must wake up to the wealth, opportunities, wisdom, and wellbeing that is here and on its way for all.

What can you do in the midst of this ongoing change? You can live into your highest calling. You can become the Who that is really you. You can do what you love and love what you do. You can develop your beginners mind and create new ways of being and doing. You can become an enlightened conscious evolutionary! What do you say?