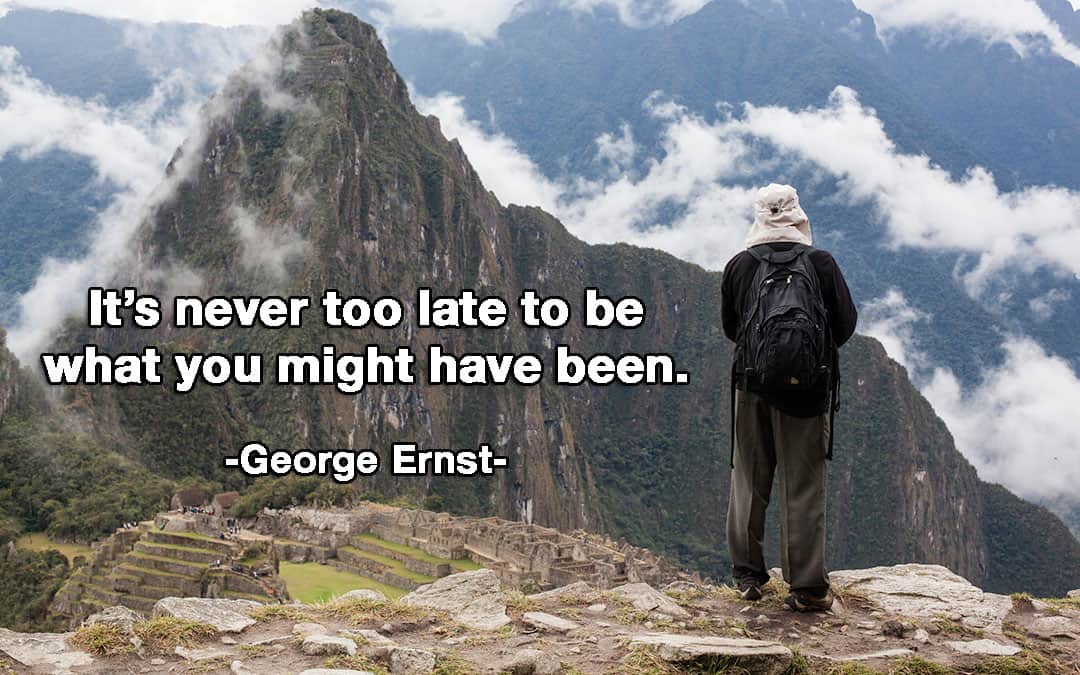 I keep meeting people who have stopped growing and expanding through unconscious conditioned beliefs. What is a belief but a thought you’ve been thinking so long that you believe it. A belief is only a thought that you keep thinking. It’s the beliefs you hold that keep you from the things that you want. A belief is only a thought you keep thinking. It’s what keeps you from being who you really are. What beliefs are holding you back?

As you keep thinking it’s too late to be what you might have been, so it is. When you change that thought to “It’s never too late to be who I am and can be.” so it is. What have you left behind that you still have a passion for? Is it the music you always wanted to play, the language you wanted to learn, the adventures you wanted to have? Put your thoughts on it and begin to bring it forth. Then take one forward step at a time toward it.

This connects to what might be called the Art of Allowing. You begin to allow yourself to be what you truly want to be. But you say no, I don’t have the time or the money or the physical strength or the knowledge or or or…..and so it is. When you turn these self defeating thoughts around to think and talk about how you’re doing it here and now, the Universe, Source, Inner Being, God says, “All-right, here we go.” and you allow it.

I wrote an award winning visionary fiction novel four years ago. I’d wanted to write a novel for decades and had started and stopped countless times but just couldn’t get into it. Who was I to write a novel? What experiences could I bring to the table? How would I get it published? Who would read it? On and on came the self fulfilling negative thoughts that all proved to be exactly what I believed. Then one day it all changed.

I woke up with an inner directive to get up and write Mystic Travelers: Awakening. I had no idea what it was to be about but I got up every morning at three o’clock, went to my computer and started writing. I decided to step into the river of life’s flow so the visible and invisible could meet. Eternity flooded me and overwhelmed the thoughts I’d been thinking. New thoughts came to replace them. Little by little we accomplish much.

This is what it is to be a beginner. You start without knowing much and just get involved. If you’ve forgotten what I’m talking about go hang out with little children who are always involved in creating something new and imaginative. As we get more programmed, conditioned to concern ourselves with what others think, we shut down and dumb down to fit into the crowd. We deny our creativity and bow to the authorities.

Do you see where this has taken you? Do you know you’re still alive; a co-creator, a genius, a brilliant light shining in the darkness. Feel it? Expand into it. Sit with what you might have been before you got those disempowering beliefs. Open your hands, your mind, your heart and soul to the Who that’s really You and think thoughts of “I Can!” Imagine your child, your hopes and dreams. Take the first  step, then the next and the next into your aliveness. It’s never to late to learn, to become the Who that’s really You.