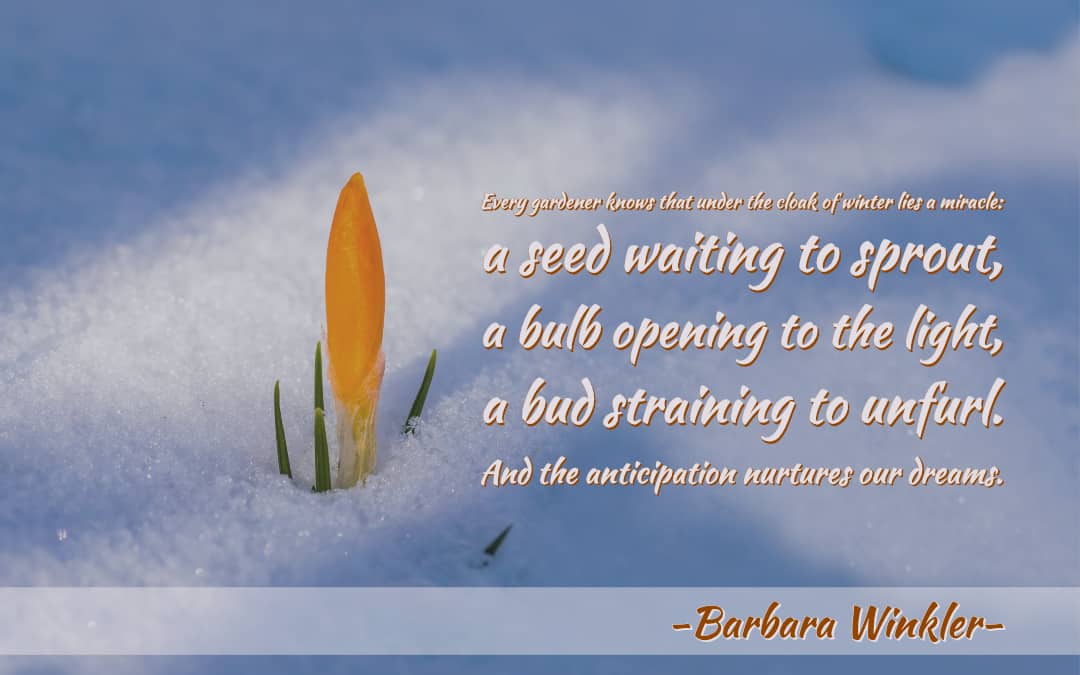 After another snowfall, I took a walk by the Dolores River a block away from where we’re presently living. Alone in the silence of late afternoon, the sounds of running water came unannounced and stopped me in my tracks. I turned and found my way through the underbrush to the shore of the river where there was a significant run of open water that soon disappeared under a mass of ice covering everything downstream. I came to rest against a small tree in awe of this living miracle opening itself to me.

The cloak of winter was lifted in this moment allowing me to ponder the autumn months that had left tiny remnants of dried seeds on their branches. To my surprise, a few new buds on other branches were already formed, waiting to sprout. It must be February, I thought as I plucked off a dried seed that would never blossom, becoming aware of the billions of new ones that would. The dream of what had been and what could be washed over me like the open water and the ice covered river; a living paradox.

In that moment I remembered a blog I’d read by a young woman from New York City a few days before who had nothing good to say about February. She’d complained about the snow, the cold, the long dark dreary days, the inconvenience of this wretched month and how she wanted to erase it from the calendar. I sent her and all the others that felt this way an intuitive message about the moment I was having and how February was the miracle month of gestation that helps bring forth life in all it’s forms.

As I’m no longer a young person, I’m finding a new wonder that nurtures dreams. I’m discovering so many things that in my younger years seemed hidden because I was too busy and impatient to look for them. Today, I’m discovering that what appears to be cloaked is really what I’m not giving attention and awareness to. It’s not what’s out there or not out there that’s disturbing but rather what’s in here, in our minds that excludes  stillness, openness, presence and wonder. Discovering this opens new worlds.

Thoreau once said: “It‘s not what you look at that matters, it’s what you see.”  Seeing  the miracles that lie under the cloak of February’s many changes opens the doors of perception that allow us to see with new uncloaked eyes. We’re given in-sight into the mysteries of Nature’s many wonders and into our own True Nature that’s part of the ever unfolding Cosmic mystery that lives in us and we in It. This Ineffable Essence makes itself known within every season which is why we say: Every season has Soul.

Though February is short and seems too long for some; it’s filled with love and sweet surprises. It beckons us to rest awhile longer before the energies of Spring overwhelm us with new life everywhere. Love is in the air even in this short month but you have to slow down to experience it. You have to savor the days like a vintage wine and give thanks for the freezing and thawing that sing Nature’s songs and enliven creation. The uncertainty of each day is the gift of a shy lover who calls us to new life in subtle ways.