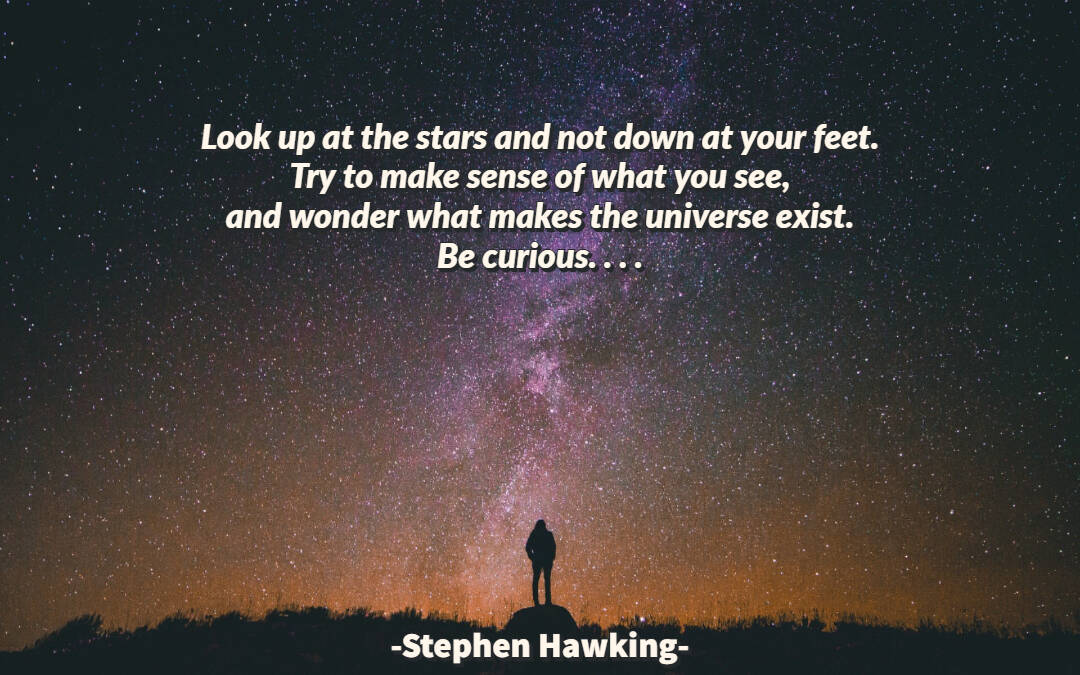 According to the U.S. Census Bureau in 2015, around 46 million Americans live in the nation’s rural counties, 175 million in its suburbs and small metro areas and about 98 million in its urban core counties. This means that around 273 million out of 319 million people in the U.S. live where they can’t see the multitude of stars at night due to the ambient light. Only 14.44 percent of those living in the U.S.A. can see the vastness of  space surrounding them unless they get out into the country and look up.

When Stephen Hawking tells us to look up at the stars and be curious, he’s inviting us into the vastness of our True Nature that’s ever present, ever revealing the mysteries inherent in the vast expanse of space within, outside and flowing through us. He’s pointing to the infinite possibilities open to us that we fail to be aware of. His directive is to wonder, be curious and open ourselves to more than the daily dramas of our own making; to awaken to a wisdom that leads to new ways of being and doing.

Living in cultures that are, to a great extent, cut off from the natural order of things, we humans get caught up in an egocentricity that keeps us stuck in ourselves, our dramas and our primitive urges for survival, sexuality, power over and acquisitiveness. The more ego, the more conflict, discrimination and loss of connection with our True Nature. We then turn to tribalism seeking to define who’s with and against us which expand the inner wars outward leading to further alienation, disconnection and diminution.

The so called ‘cultural wars’ we’re fighting today are a result of our lack of awareness of who we are and who we’re not. When our True Nature is not known, it’s replaced by a false nature that doesn’t have the ability to understand who we are, why we’re here and discern what true freedom is. It’s only when we shed the garment of the selfish self that we can ‘wake up’ to who we truly are and live within our True Nature. Here we recognize our essence, our being, our primary awareness that’s Integral and One.

The primary ‘awakening’ here is to realize and know yourself and all so called ‘others’  as Being, Essence, True Nature. It’s who you are, who we all are. To ‘know’ this is the necessary element for essential activation of a whole new way of Being and Doing. It’s the awareness that we are all One, with no exclusions.  The freedom we seek includes working through all our issues which become opportunities to recognize ourselves in new ways. Within this ‘self realization’, life continues to flow with discoveries that keep unfurling to disclose more and more of what is True Reality. It’s an endless awakening.

It’s time to see through and discern the delusions and structures that form our conventional experiences. It’s also time to recognize that True Nature is pure spirit and so is everything! In our direct experience we discover that we live in a Holographic Universe where the Whole is greater than the sum of its parts and each part contains the Whole. It therefore behooves us to awaken continually to this interconnectivity and experience the Whole in every part, including ourselves. Here, we are Wholeness.