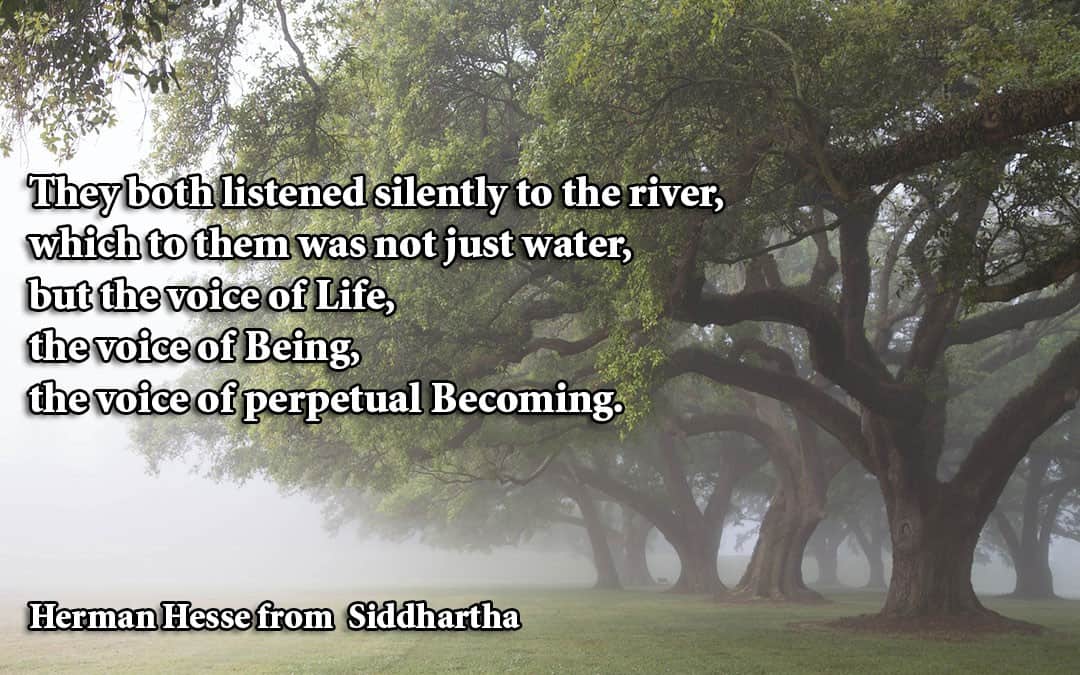 When I first read Herman Hesse back in the sixties, a whole new world was opening for me and millions of others. It was as if we woke up one morning and the veil between being and becoming had been ripped apart from bottom to top. There were messages being sent from unknown places and spaces that encouraged and inspired new ways of seeing, being, and becoming.

An invitation was being sent to awaken us from simply being part of an unconscious evolutionary process to participate consciously in it. A new stage of development was emerging and will increasingly continue as we give attention to it. Awakening to and appreciating who you truly are encourages participatory relations with the world of form and formlessness. It’s a process of living into your fullest possibilities and potentialities.

The Life Force in the mighty oak tree is invisibly hidden in the seed encased by the shell of the acorn. Each of us has a seed of Infinite Life planted within that awaits the proper conditions to grow, change, and rearrange. Inside the seed is an entelechy. It’s the essence of the organism and not discoverable by scientific investigation. Even the most powerful microscopes can’t detect it and yet it’s here, invisibly hidden in the seed.

At each stage of human history the silent evolutionary pulse has brought us to new levels of understanding and accomplishment. Each new stage requires a transformative transition in consciousness. The archaic, magical, mythical, and rational stages of consciousness have brought us from basic survival, tribal conflict and cooperation, reason and duality, to the present condition where the next stage is emerging.

This next stage is called unitive, non-dual, and contemplative. It’s where we become consciously aware of our part in the evolutionary process. So many of our thoughts, words, and actions are unbecoming. They come from the previous stages of development and lack the necessary energy to draw us forward into the next stage that offers greater abundance, balance, and creativity for the whole of creation.

The more conscious we are of our Being, the more conscious we can be of our Becoming. It’s built into the divine seed within us. It’s participatory and interconnected with the ever unfolding story of creation of which we are all an integral part. Does any of this resonate within you? Are you experiencing this inner awareness and shift of consciousness? Are you sensing something new wanting to birth in and through you?

We are presently at a tipping point in human history. The voice of perpetual Becoming is asking us to grow into the fullness of who we’ve been created to be. To embrace change is to awaken to your part in the divine unfolding of this new reality. The time is now, the place is here, infinite Life is ever near. Who and what are you becoming?