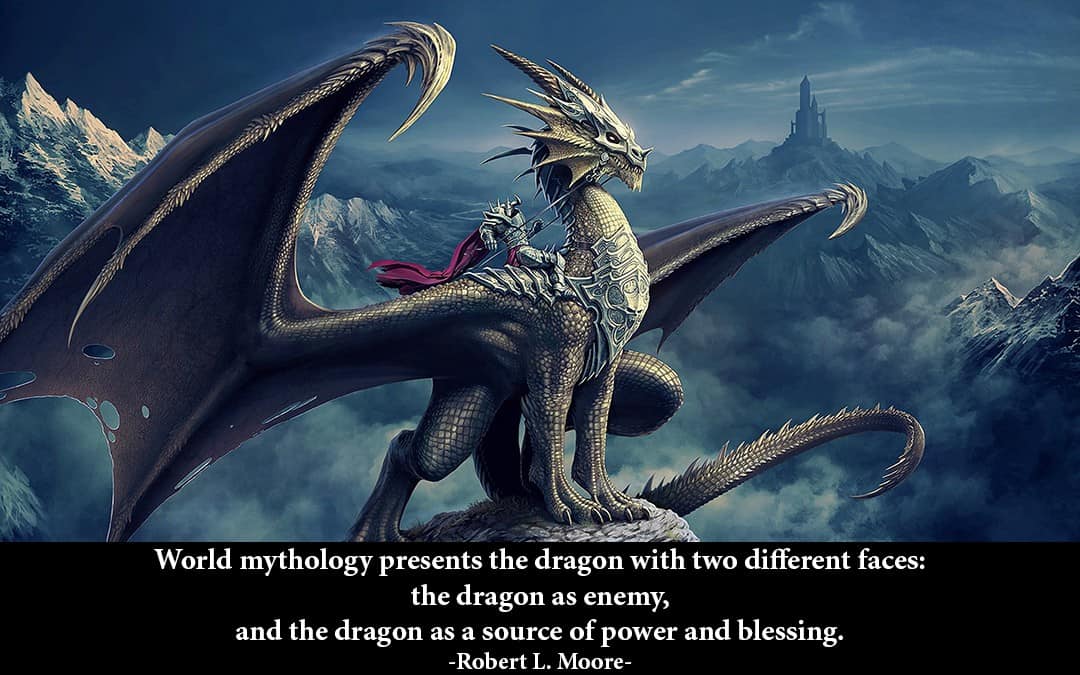 Years ago when I was doing graduate work in spiritual theology and depth psychology I had an archetypal dream. I was in some kind of sacred space approaching a high altar behind which I knew a secret passage existed. I was approaching the steps which led to the altar when, out of nowhere, a giant dragon appeared breathing fire and blocking the way. My immediate response was fright. My secondary response was to surrender.

I knew I couldn’t slay the dragon so I submitted to its transformative and regenerative energies by kneeling into a folded leaf position at the foot of the steps. As I lay there I wondered about the secret passageway and where it led. I wondered why this dragon was guarding it. In my non violent surrender I wondered what would happen next. The smell of incense reached my nostrils but no sound reached my ears. All was silent.

A deep peace flowed through me as I slowly raised my head and torso to sit on my folded legs. The dragon was gone. A golden glow radiated out from behind the altar. I stood up, stretched, bowed, and walked up the steps to the altar, placed my hands on it and felt the energy. It drew me around to the back side where a golden glow marked an opening into the unknown. On my hands and knees I crawled through the portal.

Decades later I came to see this dream as a metaphor for the hero’s journey. In Carl Jung’s depth psychology, the dragon symbolizes the archetypal Self which is also called the “Great Self Within.” This Self can become an enemy when it’s power overwhelms the ego with its grandiose energies. It can also become a beneficent ally with its extraordinary power and blessing energy. Befriending this energy is imperative.

The demons and dragons have never lived outside us. Jung plumbed the depths of the human psyche to show us the inner reality. In his psychology of the shadow, the goal is to bring mutual respect, reconciliation, and peace to the inner civil wars within. The path of individuation, liberation, is a struggle to get conscious. It’s a process of reconciling the many parts or our Self to be loved, respected, and accepted. It’s about awareness.

When we face and befriend our own grandiosity, arrogance, hubris, self righteousness, pride, arrogance, and unconsciousness we awaken to the “Great Self Within”. It is here to help heal the separations and divisions within and without. Any realistic hope for a promising personal or planetary future requires us to wake up and face the dragon of personal and spiritual grandiosity which is hidden and unconscious within.

Imagine waking up to the presence and guidance of your archetypal Self. Imagine invisible realities helping you succeed in your struggles. Imagine help being here for you right now and more on its way. Imagine befriending your dragon and becoming whole.